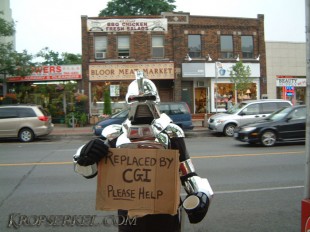 SyFy has ordered a new spin-off of Battlestar Galactica set between Caprica and the original (reimagined) BSG series.

As of now, the fate of Blood & Chrome is undecided.

It was initially pitched as an online series, similar to the Battlestar Galactica ‘webisodes’ The Resistance and Face Of The Enemy. Based on initial concepts SyFy was on board, and production began in Vancouver last year on a two hour pilot for television. Composer Bear McCreary recently stated that he had finished scoring the pilot.

In March, 2012 footage was ‘leaked’ and looks, pardon the expression, frakking amazing.The leaked content was subsequently removed but can be found at:
http://www.buzzfeed.com/catesish…

The following day, SyFy announced that the series was canceled but it could potentially continue as a web series, as initially developed.

“Though the vision for “Battlestar Galactica: Blood & Chrome” has evolved over the course of the past year, our enthusiasm for this ambitious project has not waned,” Stern said in a statement today. “We are actively pursuing it as was originally intended: a groundbreaking digital series that will launch to audiences beyond the scope of a television screen. The 90-minute pilot movie will air on Syfy in its entirety at a future date.”
Syfy president of original programming  Mark Stern

“This Has Happened Before”: What We Know

Official description: Battlestar Galactica: Blood & Chrome takes place in the 10th year of the first Cylon war. As the battle between humans and their creation, a sentient robotic race, rages across the 12 colonial worlds, a brash rookie viper pilot enters the fray. Ensign William Adama, barely in his 20’s and a recent Academy graduate, finds himself assigned to the newest battlestar in the Colonial fleet… the Galactica. The talented but hot-headed risk-taker soon finds himself leading a dangerous top secret mission that, if successful, will turn the tide of the decade long war in favor of the desperate fleet.

“The ‘Galactica’ universe as re-imagined by Ron Moore and David Eick is rich with possibilities and backstory,” said Syfy programming head Mark Stern. “We jumped at the chance to revisit the William Adama character and explore this exciting chapter in the BSG narrative which falls between the events of the original series and the prequel, ‘Caprica,’ currently airing on Syfy.”

“While maintaining the themes of politics, social propaganda, and the timeless question:  what does it mean to be human? – ‘Blood & Chrome’ will also return us to the authentic, relentless depiction of combat and the agony and ecstasy of human-Cylon war, which was the hallmark of ‘Battlestar Galactica’s’ early seasons,” said David Eick.

“But the movie isn’t confined to Galactica,” said screenwriter & BSG veteran Michael Taylor. “Far from it. It’s a story that will take us to new corners of the Battlestar world and yet it aims to be a very contemporary war movie in a lot of ways…We’re not going to be shying away from R-rated blood and guts and sex. Because this is initially meant to air online, we pretty much have no restrictions in that department.”

“The Plan”:  How does this fit into the BSG Universe?

Check out the full BSG timeline from the Battlestar Wiki

“Razor”:  Will it actually be any good, more importantly, can it succeed?

While we still wait for official word on Caprica being picked up for a second season, it’s not clear whether this would be fully fleshing out the BSG universe into multiple concurrent shows, or if this would be replacing it as ‘the BSG prequel that most fans wanted in the first place.’ There has been precedent before for overlapping science fiction, most notably Star Trek and more recently (and more applicably since it was SyFy itself) with the Stargate Franchise. Although those were more robust times for TV,  lately there has been more of a divide between ‘network TV’ and ‘cable TV’ programming. Serial dramas, genre shows, and well, let’s face it anything other than RealityTV & game/talk/variety shows are doomed on network TV. If the announcement was for a major network doing a BSG spin-off, it couldn’t possibly fare any better than Moore’s Virtuality. SyFy could be the last bastian of hope for SmartTV, and great, serial science fiction.